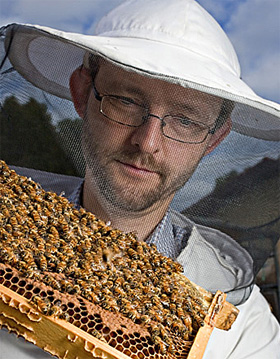 The University of Western Australia

Born in 1969 in Ermatingen, Switzerland
Studied Biology at the University of Zurich

Fighting for the Honey Bee

The honeybee (Apis mellifera) has a worldwide distribution and is the major pollinator of native flowering plants on all inhabited continents. The honeybees' agricultural importance as a pollinator for major crops is very significant, but in the past has often been undervalued and taken for granted in many contexts. Honeybees are vital for by far the greatest part of worldwide crop pollination, for example of fruits, vegetables, cattle feed, nuts, seeds and cotton.
The global importance of honeybees for ecosystems and human food production has been highlighted in the last decade by devastating global declines in both feral and managed populations, especially in Europe and in North America. These losses have been caused mostly by the spread of parasites and pathogens. Australia has so far been spared major losses of honeybees and remains the last place on Earth with a large and generally healthy bee population. This is partly because strict quarantine regulations have so far been successful in keeping major threats such as the Varroa mite and Colony Collapse Disorder out of Australia.
However, despite continuous efforts, it has become obvious that these protective measures are not sufficient to safeguard Australian honeybees forever. Two major threats, the small hive beetle and the Asian honeybee, have successfully established themselves as new pests. It has not been possible to eradicate them, and instead they have started to spread to other parts of Australia and cause harm.
In response to these threats, a consortium of beekeepers, governmental representatives and scientists was formed to prepare Australian honeybees for a grim future. In June 2012, a proposal will be submitted to the Australian government that proposes the creation of a Cooperative Research Centre (CRC) on honeybees and pollination. The Centre for Integrative Bee Research (CIBER) has been a very active partner in the development of this initiative and has been nominated as the major hub of activities and as the headquarters of a program on honeybee immunity and parasites. However, as the bee and pollination crisis has not been resolved on a global scale, we are faced with several important questions. Given that financial and intellectual support of substantial magnitude become available, how can we use these resources efficiently to prepare and protect honeybees? What options do we have to avoid major losses and enable honeybees to survive in challenging environments? What scientific research needs to be done and how can the results be used to help beekeepers on the ground?
Fundamental scientific research has made enormous progress over the last decade: biologists are now able to characterise any molecule of interest quickly and at low cost - even if the molecule of interest is as large as an entire genome. Evolutionary ecology has generated a very large body of literature that has expanded our knowledge on host-parasite interactions. I am convinced that these advances offer new opportunities to address the problems outlined above and I intend to use my stay at the Wiko to research and develop them. It is obvious that current approaches using chemical treatments to control (bee) diseases will fail in the long term, as we observe that parasites become resistant towards the treatments. However, the development of more systemic approaches to tackle these issues has only very recently begun.

Recommended Reading
For more information about the Centre for Integrative Bee Research and its activities, visit www.ciber.science.uwa.edu.au.