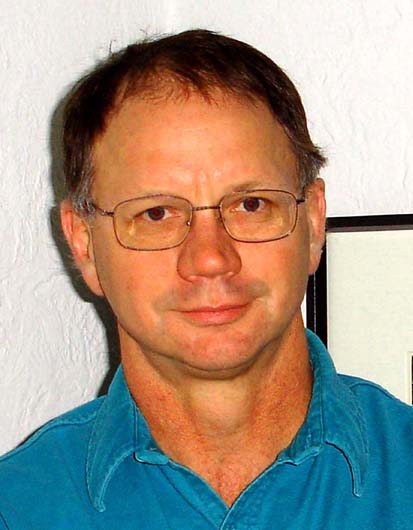 Born in 1954 in Lake Charles, Louisiana
Studied Zoology at Arizona State University and Ecology and
Evolutionary Biology at the University of Arizona

In a nutshell, I hope to fuse epidemiological theory with population genetic theory of host/parasite coevolution. Epidemiological theory has a long history, and it has been successfully used to describe the spread and fade-out of diseases. The models, however, generally assume that all hosts are susceptible to infection and that whether they become infected depends mainly on the rate of contact between infected and susceptible individuals, as well as the probability of transmission between hosts. As such, genetic heterogeneities among hosts, such that different host individuals are susceptible to different parasite genotypes, has not been considered in an epidemiological framework.
Population geneticists, in contrast, are inherently interested in the existence of genetic diversity, and explicit genetic models on host-parasite coevolution have been constructed for almost 30 years. The population genetic models, however, tend to assume that the probability of infection depends only on the frequency of "matching" parasite genotypes. And, as such, the number of infected hosts, or the total number of infectious propagules in the parasite population, has not been considered. Clearly, biologically speaking, the number of infected hosts AND the frequency of hosts infected with different parasite genotypes are both important in disease spread and persistence in natural populations.
I plan to fuse the two approaches. In other words, I plan to build models of host-parasite coevolution that include genetic variation in both the host and the parasite, and to do so in an explicit epidemiological framework. Preliminary results suggest that the fusion could be quite interesting. I have already found that the likelihood of the spread of disease is inversely proportional to the number of resistance genotypes in the host population. Finally, I plan to apply the fused approach to study the effect of host/parasite coevolution on selection for sexual reproduction in hosts. Under the Red Queen model of the evolution of sexual reproduction, the advantage to cross-fertilization is that it provides the offspring with a partial escape from infection, at least when compared to either self-fertilization or asexual reproduction. The goal would be to evaluate the Red Queen hypotheses under various assumptions about the genetic basis of infection and the ecological basis of disease transmission and virulence.

Local host competition in the evolution of virulence

Advice of the rose : experimental coevolution of a trematode parasite and its snail host