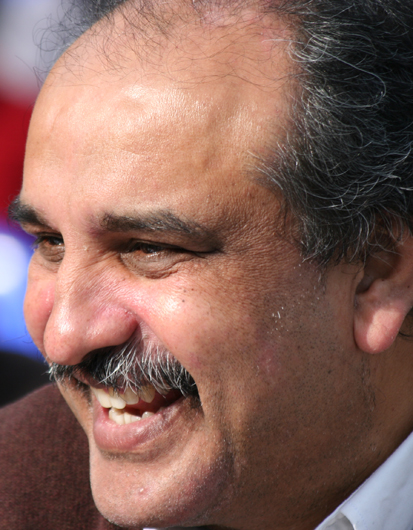 Born in 1961 in Karachi, Pakistan;
Studied Medicine and Surgery at the University of Karachi
and Anthropology at the Johns Hopkins University

The movement for the creation of Pakistan in the 1940s sought to transcend the divisions among Muslims of South Asia through the symbol of the emergent state. However, from the very beginning the diversity of people's lives and particularistic cultural experiences remained in perpetual tension to this order. The mistrust shown by the new Pakistani state, wrapped as it was in the ideology of Muslim nationalism, toward the diverse aspirations of its own people led it to impose a meta-narrative of an undivided nation on the populace. A reaction to this political process was the gradual cracking of the ideological edifice of a moral community. For example, by the mid-1950s regional and nationalistic claims by Pakistan's diverse ethnic groups severely tested the promise of the Muslim nationalism that led to the creation of Pakistan in 1947. Foremost among these was the voice of its Bengali citizens, who as the largest demographic part claimed their economic and linguistic rights from the overtly centralizing state in Karachi, fourteen hundred miles away from Dhaka.
Such histories are often deleted from nationalist master narratives that induce selective national amnesia because these events fit awkwardly into neatly woven patterns. In Pakistani historiography, in which the major preoccupation remains the narrative surrounding the creation of Pakistan, many aspects of national life are given scant attention. A major arena of national amnesia that my project seeks to address is the absence of any serious work on the nascent Communist Party of Pakistan's (CPP) relationship with the populace and the state. My research seeks to critically engage with the history of Pakistan's early years of existence, paying special attention to the CPP during its brief period of legal existence after Pakistan gained its independence. In pursuing this task my study concentrates on documenting the history of the working class movement while also focusing on the cultural processes to offer a perspective beyond the official retelling of Pakistan's history, which periodically omits how the new country struggled to find the ideological and cultural basis for its creation and existence.
Further, based on ethnographic and archival research, during my residence at the Wissenschaftskolleg I will be working on a book-length manuscript that will contribute to the understanding of the historical processes in Pakistan that have led to the contemporary decline of class-based politics and the concurrent emergence of a politics increasingly shaped by issues of ethnic, religious, gender, and sectarian differences. Within this broader context, the proposed monograph will indeed be among the few social and cultural histories of the working class movement of Pakistan.

My paper will discuss some of the intellectual debates among literary figures that followed the partition of British India (1947) in the newly formed state of Pakistan. I suggest that as much as the new country was formed on an ideological platform of Muslim nationalism in South Asia, the shape of its future culture initially remained an open question. In so doing I primarily use the writings of the Urdu short story writer Sa'dat Hasan Manto to help rethink the moment in Pakistan's history where contesting voices debated what shape Pakistan's social, political and cultural life would take in the ensuing years - years that sowed uncertainty and confusion within an emerging nationalist framework. I argue in the paper that Manto's short stories - written immediately after the carnage of 1947 - may be read as representing his ambivalence and uncertainty with regard to the consolidation of a unitary identity in the Pakistani state. The rupture and calamity of the partition was already constituting new identities in Pakistan, and a language of tolerance and compassion as perpetuated by liberals and conservatives alike - one language (Urdu), one religion (Islam), one people (Pakistani) as well as class solidarity - was no palliative for the unsettling, troubling and disabling wound.

Within this larger context, in Pakistan's first few years of existence, certain well delineated ideological camps contested for influence over the state and the populace. One group with a particularly clear ideological perspective was the set of progressive intellectuals closely aligned with the Communist Party of Pakistan (CPP). Of course there was opposition from various quarters to this specific understanding of culture and literature, yet other groups were not as well organized and consisted of a range of free thinkers, modernist poets and independent-minded intellectuals as well as those who sought to link the question of Pakistan with Islamic morals and values.

As I discuss the writings of specific personalities who belonged to these political groupings, I would like to make clear that this paper is not another survey of the discussions on religion (Islam's role in the new country) and national belonging (patriotism, Muslim Nationalism) within intellectual circles at the moment of Pakistan's inception. In contrast to these dominant themes - through which Pakistan's history is rendered intelligible to many - I will instead focus on a debate surrounding the question of morality ("pure or perverse literature") connected to a text of short stories on the partition by Manto himself. To be sure, I concentrate on the exchanges so as to suggest how these arguments were not only limited to the literary sphere but also raised pertinent questions regarding human subjectivity and its relation to the uncharted future facing Pakistan at the moment of its birth. By focusing on Manto's writings I revisit this period to demonstrate the debate among intellectuals as to what would constitute a national culture; a discussion that may still be ongoing and incomplete.

Comparing cities : the Middle East and South Asia ; [... papers from the workshop, comparing urban landscapes held at the Lahore University of Management Sciences (LIMS) in April 2004]