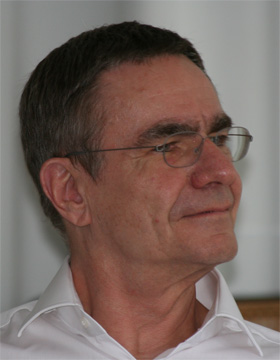 The project approaches the problem of locomotion from the perspective of embodied systems. According to the central tenet of this approach, brain processes in general and - on the lowest level - motor control in particular should be described, analysed and theorised under the assumption that these processes emerge from brain-body-environment interactions.
For locomotion, rhythmic activity patterns appear naturally. A theory will therefore start from a Dynamical Systems perspective. The challenging part of this approach results from the fact that neural control has to operate in the sensorimotor loop, where external sensor signals as well as internal sensor signals will continuously drive the dynamics of control units. On this background the project will focus on two aspects:
1) Rhythmic neural activity patterns can be generated in at least two different ways: First, they can appear as the intrinsic dynamics of specific neural structures functioning as CPGs; i. e. they oscillate already as isolated neural systems. But rhythmic activity patterns are generated also in shorter or longer (reflex) feedback loops. The subject to study is the interplay of CPG and reflex loop functionality in concrete behavioural tasks for animals and/or animats.
2) Discerning between external and internal signal loops, reflecting the difference between perception and proprioception, the second aspect concentrates on the interdependencies between these signal lines and on their role for the modulation and switching of behaviours.
Staying in the context of embodiment, the conceptual framing and the derived theoretical results will be tested on physical robots or by using physical simulations of e. g. multi-legged walking machines.

Embodied Cognition, Evolutionary Robotics, and the Neurodynamics of Behaviour Control

Evolutionary Robotics (ER) is still a developing field of research whose intrinsic character is interdisciplinary. It takes up approaches from and contributes to fields like neuroscience, cognitive science, computer science, and robotics. Using evolutionary computation techniques, ER's objectives include the development of neural behaviour control for physical and/or simulated robots, while at the same time exploring the intricacies of evolutionary theories and contributing to deeper insight into behaviour-relevant neural processing in biological nervous systems by analyzing evolved artificial ones.

Although my primary interest here lies in the evolution of sensorimotor networks - the central theme of the working group - I will be introducing evolutionary robotics against the backdrop of various attempts to approach the problem of neural processing - i.e. cybernetics, Artificial Intelligence (AI), embodied and situated cognition, artificial Neural Networks, and Dynamical Systems Theory.

In the assumption that cognitive abilities are based on the dynamical properties of the underlying biological or artificial neural substrate, I will shortly review the properties of neurodynamics. Furthermore, accepting the view that the studied cognitive faculties are necessary for the survival of a system in its given environment, I will introduce the artificial life approach to evolutionary robotics, and this followed by presentation of some typical results achieved through application of these methods. Finally, I will forward certain examples of evolved neural controllers for multi-legged walking machines.

Attractor landscapes and active tracking : the neurodynamics of embodied action

Transients of active tracking : a stroll in attractor spaces

Dynamical systems in the sensorimotor loop : on the interrelation between internal and external mechanisms of evolved robot behavior