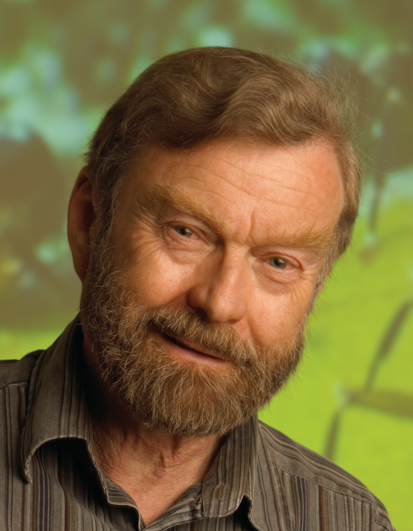 Born in 1936 in Erling-Andechs, Bayern, Germany
Studied Biology, Chemistry, and Geography at the
Julius-Maximilians-Universität Würzburg

Social Insects as a Model System for Evolutionary Developmental Biology

Developmental Evolution of a Superorganism

The idea of the superorganism was extremely popular in the early part of the last century. William Morton Wheeler returned to it in his writings about insect societies repeatedly and in his celebrated 1911 essay "The Ant Colony as an Organism" he stated that the animal colony is really an organism and not merely the analog of one. This exercise, however elaborate and inspirational, eventually exhausted its possibilities. Almost one hundred years later, the concept of the superorganism is experiencing a vigorous revival with a new understanding and acceptance of multilevel selection theory.
This project will look at the evolution of social organizations in insects and underlying mechanisms that explain the enormous success of insect societies. These different social organizations exhibit various degrees of cooperation and division of labor. Such cooperative systems can only work by means of communication, without which there is no cooperation or division of labor in any social system, whether it is an assembly of genes, organelles, cells, or organisms. Comparative studies of various superorganismic grades demonstrate that intra-group cohesion is driven by inter-group competition. With increasing group cohesion the group (insect society) becomes the major target on which selection operates. In the context of this discussion and book project I will cover the fields of sociogenesis, sociometry, communication, and group-level regulation of division of labor.

Communication and Cooperation in Ant Societies

Ants are masters in chemical communication. In the early stages of the study of chemical communication in animals, scientists assumed that in insects behavioral responses are released by single chemical substances, whereas in vertebrates and in particular in mammals, chemical signals are complex blends of substances, mediating inter-individual recognitions and interactions. However, most insect pheromones (semiochemicals) have proven to consist of several compounds, whereby different components of complex pheromones may have different effects on the receiver, or specific blends of compounds may identify group members, rank, or individuals. Thus, with respect to the sophistication of their chemical communication systems, vertebrates and insects do not differ greatly.

It is also well known that communication can work through several sensory channels, that is, a signal can be composed of distinct physical components, transmitted simultaneously or in tightly paced sequence. Such multi-modal perception of composite signals has been investigated particularly well in human and non-human primates, and in birds, and in fact, was recognized by Charles Darwin in his book "The Expression of the Emotions in Man and Animals" (1872), where he noted that the intensity of communication by language is much enhanced by "the expressive movements of face and body". I think we have, for a long time, underestimated the complexity of communication signals in ants, having focused our analysis on one or the other sensory channel through which signals are perceived and processed. However, in a series of studies that began in the 1970s and continue up to date, we discovered that multimodal communication is paramount in ants. The drumming, knocking, stridulation, antennation, tapping, waggling, shaking and jerking movements are not just insignificant byproducts, but rather serve as "referential" signals or modulators that affect the response-threshold to chemical signals, or, in some cases, can even have behavior releasing function independent of chemical signals.

Where ever in nature tightly organized social groups exist we encounter the exclusion and aggressive discrimination of con-specific foreigners. In social groups contests for limited resources are usually not between single individuals, instead groups of individuals compete as units. In such cases differences in the number of individuals per group determine the outcome of the contest. Certain ant species employ ritualized tournaments during which they collectively communicate information about their size and "resource holding potential".

The spirit of the hive : the mechanisms of social evolution

The superorganism : the beauty, elegance, and strangeness of insect societies