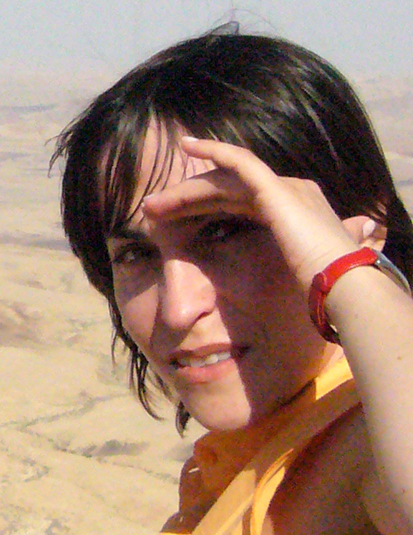 "One Day - A Whole Life. Irene's Story", working title for a video installation

Anna Konik creates video installations, and her technique combines video semi-documentary, installation, performance, and sculpture. What matters for the artist are people with whom she can engage emotionally and who she makes the protagonists of her works.

Her experience of alternative theatre played an important role in shaping Konik's artistic sensibility. But theatre-acting is no longer the natural element of her art-what is important lies outside acting, it is the search for genuine interpersonal connections. Konik collaborated, for instance, with Opera Buffa, where the actors are schizophrenia patients. There she dealt with people who were undergoing great mental suffering but who, at the same time, were unusually sensitive.

The realm in which Konik operates is very hard to verbalize. The material of her work is that which is invisible yet still perceptible-desires, emotions, indefinable intuitions; an inner world accessible through dreams, the poetic imagination and mental introspection; inner pain and one's silent grappling with it. Tragedy is often unseen by others, frequently unfolding backstage, behind the curtain, in a person's hidden thoughts, dreams, and desires.

Konik directs viewers' attention to those aspects and spheres of existence that they are unwilling to acknowledge: loneliness, confusion, disease, over-sensitivity. Her protagonists are people existing on the fringes of reality, inconspicuous and sometimes wholly transparent. These are the people that matter to her.

In terms of form, space plays an important role in Konik's works. "Space additionally defines and complements my works with its 'body'," the artist says. "It also has metaphysical significance. In "Transparency", every narrative, whether it be in word, image or space, is completely isolated. In my project "In the Middle of the Way", the narratives are shown simultaneously, so that the physical and mental journey virtually never ends."

Stories told by the excluded often take the form of confessions - "In the Middle of the Way" (a work in progress begun in 2001) has the artist talking to homeless people; in "Transparency" (2004) she listens to the life stories of lonely, elderly people; in "Toys" (2001) she does her video documentation of the work in and outside a therapy centre. The dialogues, the interviews, lend her works a quasi-documentary character-with the narrative often breaking off sharply and the dialogue giving way to an individual's empathic presence.

The artist becomes invisible so that others may talk. That is the case, for instance, with "Transparency", a video installation presented at Warsaw's Centre for Contemporary Art (CCA) in Ujazdowski Castle in 2004. The protagonists are elderly people, nearing the end of their days, who agreed to tell their life stories before the camera. Their names are Doris Wichmann, Mia, Tadeusz, and Mr. Brozy. The video image of each of the interviewees has been doubled, each being given a mirror image, as it were, and monologue turns into a bizarre dialogue with one's double. The whole is tantamount to an improvisation on painful loneliness. But the mirror image and the varied pace of the projection cannot overcome the paralyzing monotony of the discourse, which is filled with constant repetitions. "Only one surprise is possible," says Konik, quoting from critic Jan Blonski's essay on Beckett, "that one of the repetitions will be the last one." (1)

Konik's protagonists are eternal wanderers-homeless tramps whom the artist meets on the streets of Warsaw, Berlin, Moscow, Cleveland, and forced by life to be always on the move. Others travel in the realm of imagination, living amid memories and enclosed within the four walls of their home, outside of time. Besides the motif of loneliness, the second of Konik's main themes is that of traveling, of being constantly on the road. This is not only about traveling through the spatial dimension but also about inner time, about the spiritual journey...

Konik's most recent work, "Our Lady's Forever" (2007), is her most poetic one to date. It was inspired by a play written by a schizophrenia patient, a story of unhappy love and endless longing and . . . endless waiting. The video based on the drama was made by Konik in Cork, Ireland, in Our Lady's, a former mental hospital, whose architecture visually complements the story. The video is a seven-channel projection, without beginning or end. The protagonists are a man and a woman who never appear together but criss-cross through different scenes. Suspended in time, they are like characters from Beckett's play, moving like ghosts through the empty rooms and corridors, searching for one another. Even though they are in the same place they constitute two separate universes and they move through the empty spaces alone. The wandering shadows intensify the somnambular atmosphere, the narrative breaks off, the scenes arrange themselves into sequences of poetic images: the woman facing a white wall, light entering a room, the man sitting on a chair, smiling and hand-holding children. The changing images form a bizarre puzzle, as if intended to reflect the protagonists' emotional states, their repeated passages through the hell of the soul. The scenes from the deserted hospital are accompanied by images of a ship on a churned-up sea stretching to the horizon. Watching these sequences, we hear the roar of the sea and can almost feel gusts of wind buffeting our face.

In her dual artistic and existential journeys, most important to Konik is her interaction with a fellow human being. In her works we find neither a celebration of suffering nor the voyeurism typical of such documentaries. Konik neither humiliates nor manipulates people; indeed, it is often the case that through her work she helps them to regain their sense of dignity. Provocation is replaced by empathy and conversation eliminates distance, removing the invisible wall separating the protagonists from the world and thus reintroducing them to it.

In the same city, under the same sky ...

A Grain of Sand in the Pupil of the Eye : Video works 2000–2015
Centrum Sztuki Wspólczesnej Zamek Ujazdowski more publications in the Fellows' Library

In the Same City, Under the Same Sky ...
CCA Ujazdowski Castle more publications in the Fellows' Library