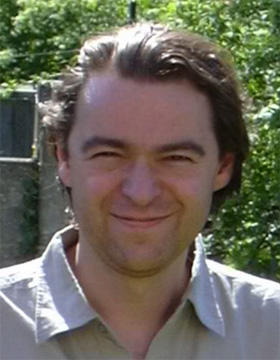 My research interest is in using genetic information and computer simulations to understand human evolution and demographic history. At the Wissenschaftskolleg, I will be part of the Evolutionary Medicine focus group and will be developing evolutionary bioinformatics and population genetic simulation approaches to identifying medically relevant genetic variation and understanding the evolution of that variation. I am particularly interested in the interplay of demography and natural selection in shaping the distribution of phenotypically relevant variation in geographic space. Some of my recent work has been concerned with the evolution of lactase persistence; a model system where natural selection is episodic, spatially structured and associated with the culturally transmitted practice of dairying. I have also found myself, somewhat to my own surprise, using forward stochastic computer simulations to explore the effects of demography on the accumulation of culturally transmitted skills. In addition to continuing work on these areas of research I plan to develop a new method for identifying genetically determined metabolic incompatibility that may lead to disease. I will take an evolutionary bioinformatics approach to integrate genomic signatures of natural selection with data on metabolic networks.

Demography and the origins of behavioural modernity

The Upper Paleolithic Transition, sometimes know as the human revolution or the beginnings of behavioural modernity, is a period in the human past that is associated with a package of increased cultural and technological complexity including the appearance of advanced stone tools, bone and antler tools, new hunting technologies, body decoration and ornamentation, musical instruments, long-distance raw material exchange, and art. It occurred around 40 to 50 thousand years before present in Europe and Western Asia, but - on current evidence - somewhat later in Southern and Eastern Asia, Australia and North Africa. However, many of its features make transient appear-ances some 50 thousand years earlier in sub-Saharan Africa. Many explanations for this significant cultural shift have been proposed, including biological / cognitive change, innovations in social structure and language, fluctuations in ecological / socio-economic conditions and the effects of population size increase on inter-group interaction / competition. Previous work by Henrich and Boyd (2002) on the inheritance of continuous cultural representations has shown that in a model of directly biased oblique transmission (i.e. copying skilled non-parental members of the adult gener-ation), where the learning mechanism is incomplete and inaccurate, population size is a crucial variable in determining the accumulation (or loss) of culturally inherited skills. I present an exten-sion of this analytical model using semi-realistic stochastic simulations that reflect key features of human demographic conditions in the past. The simulation model consists of a large number of spatially separated sub-populations connected by migratory activity, which is determined by local sub-population density. Within each sub-population a naïve offspring generation learns a skill, through both vertical (parental) and directly biased oblique transmission, before replacing the adult generation. The results show that (1) the level of cultural skill that can be maintained in sub-popula-tions is related to the density of those sub-populations and/or the migratory range of individuals, and (2) geographic heterogeneity in local sub-population density / migratory range leads to stable spatial structuring of skill accumulation. These results indicate that demography is an important variable in explaining not only the timing of the Upper Paleolithic outside Africa but also the earlier, transient appearance of behavioural modernity in Africa, some 90 to 100 thousand years ago.