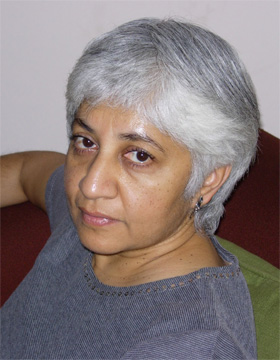 Centre for the Study of Culture and Society, Bangalore

A History of the Voice: How the Early 20th Century Speaks to Us

My current interest is in the early 20th-century introduction of (North Indian-derived) Hindustani music into some districts of what came to be called Karnataka State in post-Independence India and in the "voice" of contemporary Hindustani singer Gangubai Hangal. Gangubai claims a musical lineage going back to a school founded by the legendary Kirana Gharana singer Abdul Karim Khan in Dharwad, which remains a major center for Hindustani music. Her mother was a Carnatic (South Indian style) singer, and belonged to the devadasi tradition. Like her mother before her, Gangubai too acquired a Brahmin "patron" with whom she had children. My project will investigate the trajectories of social aspiration in the period when Gangubai started learning music that propelled her in the direction of a musical style different than her mother's.
The linguistic environment of the region - with people speaking Kannada, Marathi, and Konkani and singing in Bhojpuri-Hindustani - clearly had no parallel in other southern Indian areas. Music in the region in the early twentieth century seems to have been a realm of high social investment. Even the Lingayat monasteries invited Muslim singers to live on their premises and teach Hindustani music. What are the signifying structures carried by the voice, and how did singers like Gangubai and many other women like her become visible in performance? Did their becoming visible entail a challenge to notions of regional identity (Kannada-ness) that were taking shape around the same time and in the same region? How does their music engage with emerging ideas about cultural and linguistic identity, and what implications does an understanding of the voice's history have for present-day musical negotiations and the struggles over language?

Music in the balance : language, modernity and Hindustani sangeet in Dharwad

Gulabi talkies and other stories

Mobilizing India : women, music, and migration between India and Trinidad

Music and the Public Sphere