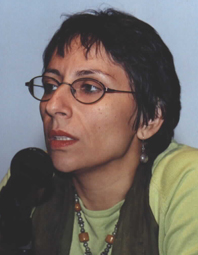 Born in 1961 in Schönaich near Böblingen, Germany
Studied Art at the Kunstakademie Stuttgart and Islamic Studies and German Literature at the University of Hamburg

It is envisioned to take my current book project Popular Egyptian Cinema: Gender, Class and Nation into its final stage. With this work I wish to offer a comprehensive and thorough study of different aspects of popular cinema in Egypt. The major research question will be to tackle the cinematic representation of gender, class, religious and ethnic affiliation from the emergence of film industry in the 1930s up to the era of globalization intersecting with the formation of current national Egyptian identity through a study of audience perception, star personae and various cinematic genres.

2. Fassbinder's Lover or the Colonial Gaze****

Fassbinder's Lover developed from a research for a documentary film project (in progress) dealing with the thorny relationship of German director R. W. Fassbinder with his North African lover El-Hedi Ben Salem, leading actor in Fear Eats the Soul (Angst essen Seele auf), who committed suicide after separating from his mentor. Analyzing this film not only on a contextual level, but also going into the details of its visual inventory and the way Ben Salem was subjected as a Black and a foreigner to a quasi-male gaze opens up all sorts of questions regarding subject and object constellations, domination and oppression, gazing and colonialist racism as it unfolds at the intersection of same-sex and cross-gender relations.

Class difference has been an ever-present and ever-determinant factor in Egyptian cinema and at the same time one of the most neglected issues in studies on film in Egypt. The social gap between rich and poor has shaped entire film cycles and, through the generic vocabularies developed for different local audiences, be it the visitors of the third-class 'tirsu' (terzo) or of the very up-to-date modern 'shopping mall movie theater', it has also been reflected on film form. Class difference has even played the role of a symbolical signifier in regard to the appearance and status of film performers. Moreover, the process of film reception itself seems governed by what Pierre Bourdieu called 'distinction', something that has been most visibly underlined by the historical division of movie theatres into three different 'classes' but which has also been reflected in the ideological arguments and moral reservations of Egyptian film criticism of national productions since the advent of film industry in the 1930s.

In this lecture I will offer a general introduction to the history of Egyptian cinema and its major film genres and their relation to Egypt's past and present social organization, that is before and after the so-called revolution of 1952. Then I will pick out two issues for a detailed analysis that should help illuminate the interaction between film and social organization: first, the controversial public debate ignited by a major box office hit in 2002, al-Limbi by Wa'il Ihsan, and, second, the history of the Egyptian action film, which due to its preference for a locally specific type of male-oriented heroism and the use of (limited) physical violence has at times developed a quite evident affinity to the urban lower class. In contrast to American action films, which were often dismissed as 'dump movies for dump people', Egyptian action films and their stars lack the overt display of 'musculinity' (muscular masculinity) and the perfect 'body machine' of their Western counterparts, a fact that is related to an ambivalent relation to Western technological dominance on the one hand and to Egyptian class dynamics on the other. A possibility to understand this will be offered by a profound examination of the most successful action-related star persona, namely 'Adil Imam, king of comedy since the late 1970s, and some of his films.

Prostitute for a good reason : stars and morality in Egypt