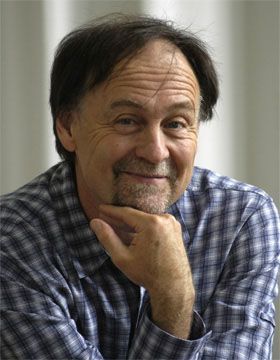 Born 1948 in Zurich, Switzerland
Studied Biology and Animal Ecology at the University of Zurich

Host-parasite interactions are important phenomena and the respective ecological and evolutionary processes are crucial for any natural or managed biological system. Parasites and parasitism have been shown to affect a wide range of characteristics in their hosts. Examples include the physiology, behaviour, social status, and life history of individuals, but also the dynamics of entire populations and communities. Questions of parasitism and how hosts respond to these challenges consequently have become a major area of research over the past decade or two. The focus has been on such questions as the evolution of parasite virulence,
processes of local adaptation, the maintenance of genetic diversity, and strategies of immune defence.
Because of the wide range of approaches used in different areas such as population biology, behavioural ecology, physiology, and molecular genetics, the field has become increasingly fragmented and the integration of progress in the different areas into a common framework has lagged very much behind. Moreover, in recent years invertebrates have emerged as very powerful study systems. This has not only provided new possibilities, but also increased confusion over terms, concepts and methods. Clearly, to understand the evolution, the ecology, the costs, and the adaptive strategies of immune defences, so as to elucidate the
inherent generalities and important differences between systems and to identify major unsolved problems, as attempted in this project, would be a major step forward. In addition, the insights may also contribute to some major questions of ecology and evolutionary biology in general, for example, questions about the processes underlying speciation events, population regulation, and species coexistence. This project is part of the study group on "evolutionary immunology"
and will not only focus on defence aspects but will also consider co-evolutionary
process and the strategies of parasites themselves.

Parasites are both the most common type of organisms and the most underestimated selective force in nature. Recent research has shown that parasites affect almost every aspect of the biology of their hosts; they have also helped shape human history. From an evolutionary point of view, whether or not a parasite can infect a host depends, among other things, on the genes that host carries.

In all organisms genes are inherited from the parent(s) when they reproduce. However, in contrast to the fairly uniform processes that govern the development from egg to adult - that is, simple cell divisions and subsequent cell differentiation into different tissues - reproductive systems are very diverse and often very complicated. Many groups of organisms reproduce clonally and so generate exact genetic copies of themselves. However, sexual reproduction is the most common type found in nature and has existed for hundreds of millions of years. Despite sexual reproduction being so common and so familiar to all of us, it still poses a number of problems that are hard to understand for evolutionary biologists and which touch on some difficult questions about the process of evolution by natural selection. Among these difficult problems is the phenomenon of (meiotic) recombination.

In the process of recombination, the paternal and maternal genes are reshuffled to generate new gene combinations that are then passed on to offspring. Besides being a biological puzzle, failures or defects in the proper functioning of this process can generate a range of diseases. Therefore, it is desirable to understand what the selective advantages of this seemingly absurd system of production might be. Indeed, dozens of hypotheses have been formulated to date as to why recombination may be advantageous. Only a few appear to be reasonable suggestions though. In my talk I will present one certain hypothesis in somewhat more detail, because it refers to the selection imposed by co-evolving parasites. Because susceptibility to parasites depends on the genetic makeup of an individual, it is actually suspected that during co-evolution hosts "escape" their parasites by producing offspring that carry novel gene combinations - and this by means of recombination. I will show that this hypothesis generates testable predictions as well as how these predictions are examined in the context of experimental evolution.

The problem of parasites and recombination raises a number of deeper issues, which will be briefly mentioned. For example the question of whether immune defenses are based on such gene combinations, what the genetic "architecture" of defense-related traits may be, and how recombination and gene combinations affect the "value" of related individuals. Understanding these issues is a major challenge for evolutionary biology.

Immune defence, parasite evasion strategies and their relevance for 'macroscopic phenomena' such as virulence

The "Spirit of the Hive" and how honeybee societies evolve Ernst Mayr Lecture ; 2009/2010

Mechanisms of pathogenesis and the evolution of parasite virulence