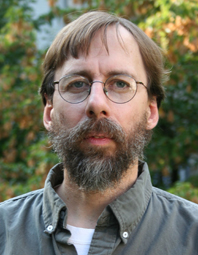 Underlying the diversification of life are processes on all scales, from the molecular - mutations affecting molecular and cellular function - to the ecological - population and community interactions directing natural selection and species evolution. These processes leave their imprints on which gene lineages survive both individually and as composed into genomes and species. The broad history of genetic descent, phylogeny, therefore contains clues about the biological processes on all levels of organization that generate diversity. I will continue to develop new perspectives and methods using phylogeny to interpret evolutionary
process. Three specific issues are the planned focus of my work in 2006/07: 1) How do we incorporate historical uncertainty into our interpretations about process? Bayesian methods can do this, but at the same time may yield biased results. How serious is this bias, and can we overcome it? 2) Functional relationships among characteristics can be revealed by phylogenetic correlations. Existing correlation methods have various flaws; I will work to improve them and develop new methods. 3) A relatively new approach, stochastic character mapping, holds promise to reveal patterns of differential speciation and character correlation. I will explore the applications of this approach.

Our Principal Narrative: The Tree
We are descended, genetically, from our parent's generation, they from their parents, and so on. If we think of the passage of genes as threads linking the generations, then the human species lineage is like a vast braided rope extending back in time: populations may separate for a while, but over time enough threads of migration have maintained the rope knit together into a whole. However, looking back far enough in time, we see that the genetic rope had been sundered in the past. Our ancestral "rope" was split in two when the Neanderthals separated and went their own way; before that, other hominids had separated and diverged. Before that, the chimpanzee lineage separated, and before that, the gorilla lineage. This process of separation of one bundle of genetic descent - a species lineages - into two is called speciation, and through evolutionary time it has been repeated to produce the vast branching tree of genetic descent we call the evolutionary "Tree of Life". We humans are one "leaf" of this tree, which includes everything from bacteria to roses to ourselves.

This evolutionary tree, also called "phylogeny", is the dominant narrative in our account of evolutionary history. For more than 150 years we have attempted to reconstruct this tree, to find out which species are on neighbouring branches. This is not an easy task, for we must hear the echoes of a genetic history millions of years old. In recent years we have found, to the surprise of some of us, that we can indeed do this reconstruction reasonably accurately. At the same time, biology has come to realize that this deep genetic history matters crucially to our explanations of why species are the way they are. History - phylogenetics - has become big business in biology.

Nature's Art
I use a group of spiders to illustrate how phylogeny can help us understand evolutionary patterns. Male jumping spiders perform courtship dances to females; these dances can be elaborate, colourful, and accompanied by song. Examining many species, we can see that some elements of the dance evolve repeatedly. An important piece of evidence for this conclusion comes from the phylogeny: if similar elements appear on far-separated "leaves" of the phylogenetic tree, this indicates these similar elements evolved independently. Thus, phylogeny tells us how many replicates there were in nature's evolutionary experiments.

I will also muse on beauty in nature, and on the question of whether the dances of the males seem more familiar than we might expect.

Lessons of History
If phylogeny helps us find the replicates in nature's experiments, then can we do statistics with phylogeny? Species have characteristics that can be observed or measured - many beetle species eat plants; some plant species reproduce asexually, and so on. One branch of evolutionary biology asks questions such as: Do plant species that invade quickly (i.e., are weeds) also tend to reproduce asexually? Do beetle species that eat plants tend to diversify into more species more quickly than those that are carnivores? These questions seek generalizations or correlations, and are interesting because they may reveal general forces acting consistently in biological evolution. Phylogeny, by showing us replicate events, can answer whether a proposed force might be general.

The rate of diversification is a balance of speciation (adding species) and extinction (subtracting species). Biologists are interested to know whether a species' traits might control its probabilities of speciating or going extinct. Thus, we can construct a simple model that describes the probabilities that a species with trait 0 will go extinct or speciate in any given time interval, and likewise for species with trait 1; the model also describes probabilities that the species will change from state 0 to 1 and 1 to 0. We can imagine using this model to simulate an evolutionary tree, with speciation, extinction, and changes in traits. We can then compare the simulations to what is actually observed. What is the probability that the model would yield a phylogenetic tree like that we have actually observed (or, rather, reconstructed)? If one model predicts the observed tree with higher probability than another model, we prefer the first model. This is "maximum likelihood estimation".

We have developed (for the first time, completed here at WiKo) the methods to calculate these probabilities, and thus a means to estimate the effect of a trait on speciation and extinction rates. However, one might ask what is the point of constructing a highly simplified model in the face of an evolutionary process that clearly involves many more than one controlling trait. One answer is the optimistic: perhaps we will be lucky and stumble across a trait that actually does have a dominating effect. Another answer is heuristic: an explicit calculation will expose the inadequacies of the simple model, and thus the need to consider more factors. And yet another answer is subversive: perhaps the theory will reveal a new uncertainty principle, that we cannot even in principle answer the questions we hope to answer. Although subversion would have been romantic, our initial explorations suggest parameters can be estimated, and thus there is no simple uncertainty principle.

The Window's Frame
Phylogenetic biology has recently embraced technology, both for data gathering (DNA sequencing) and for analysis (sophisticated computation). Because the hypotheses are of constrained form (a tree) but variable and complex, computer visualizations have proven important for biologists to explore the implications of their data. However, these implications are derived from particular methods and assumptions that even if initially accepted will eventually be doubted. But, "seeing is believing", and many biologists have treated the visualizatons too uncritically as the truth. A tool that was hoped to open the imagination has come to constrain it. We have been working to overcome these constraints, but with limited success.

Estimating a binary character's effect on speciation and extinction

The phylogeny of the social Anelosimus spiders (Araneae: Theridiidae) inferred from six molecular loci and morphology