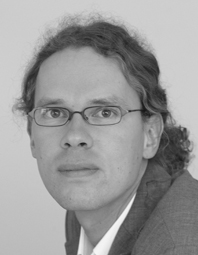 Born in 1968 in Issum, Germany
Studied Biology at the Universities of Göttingen, Cologne and Bonn

Infectious diseases impose a serious threat to the existence and fitness of their hosts. Vertebrate hosts (including humans) are protected by the adaptive immune system, which is characterised by immunological memory. For example, an adaptive immune response against a new strain of flu virus will be effective only against this particular strain of virus. Adaptive immunity can thus be regarded as a system that enables the recognition of patterns (associated with pathogens or with self), as well as the storage and recall of associated information. Despite the well-known relevance of adaptive immunity, evidence is recently
accumulating that a large part of the protection of hosts is based on innate rather than adaptive immunity. Innate immunity is a shared characteristic of even the simplest organisms. It comprises a large range of defences that seem to enable
protection without the need for prior experience. The last few years have seen an amazing success in the detection of new
mechanisms of innate immunity. However, the elucidation of these proximate causes of protection occurred virtually in the absence of knowledge of the basic biological properties. At the Wissenschaftskolleg, I thus plan to contribute to the
development of a new conceptual framework of the basic architecture of innate immunity, focusing on the aspects of specificity and plasticity. My interdisciplinary approach will be guided by fundamental questions arising from theories of host-parasite co-evolution, but potentially also from generalizations that result from the comparison with other systems for the recognition and storage of information.

Immunological Diversity and the "Beauty in the Eye of the Beholder"

Previous Tuesday Colloquia have brought to our attention the relevance of diversity in several fields, from biology to culture. I will focus on yet another aspect of life where diversity appears to be crucial: the immune system.

We live in a potentially hostile world, constantly threatened by viruses, bacteria, protozoa and worms, or even our own cells if turned cancerous. The most important protection against these threats is the immune system. However, pathogens often change quickly through evolutionary adaptation, thereby escaping our immune systems' ability to detect them. As a counter-measure, the immune system has evolved the ability to track such changes and recognize almost every molecular pattern that potentially identifies a pathogen. The immune system can even remember these molecular details, leading to highly specific, long-term immunological memory, with which we are familiar from vaccination.

It has long puzzled immunologists how this can work, because there is a dilemma: we have inherited a limited number of genes that code for immunological receptors, such as antibodies. Yet our immune system can produce antibodies that specifically identify many more patterns than there are genes available. The trick is a process that diversifies antibody genes and then selects for the most appropriate antibodies. Rather than in the germ-line, this process takes place within the immune cells of our body, i.e. somatically; we thus speak of somatic diversification. Within the last 50 years, immunologists have learned in detail how this process works in humans and other higher vertebrate animals. Knowing that the same mechanism is absent from simpler animals such as invertebrates (e.g. insects), immunologists have taught that there is no such thing as specific memory in these animals - a notion that turned out to be untrue only recently. Rather, these creatures seem to achieve similar goals (i.e. diversified receptors), just on mechanistically different routes.

While the first part of my presentation focussed on the somatic production of diversity from a limited number of genes, I will finally take a closer look at the diversity that is originally present in immune gene complexes, one of which is the so-called major histocompatibility complex (MHC). These genes were initially detected as being responsible for the rejection of transplants. The balance between the ability to detect non-self and the risk of reaction against self-tissue, leads to the notion that intermediate rather than maximal diversity of gene variants should be the optimal state in the MHC. I will present data from sticklebacks, a species of fish, which gives evidence that this expectation is indeed true. Even more alarming, sticklebacks and potentially also humans seem to choose their mating partners in a way that optimizes immunological diversity in their offspring. Aiming at optimal diversity in the offspring, it should depend on ones' own diversity in these genes whether or not a partner is attractive. In this respect, an individual that is attractive to one partner might be unattractive to another: "Beauty is in the Eye of the Beholder"!