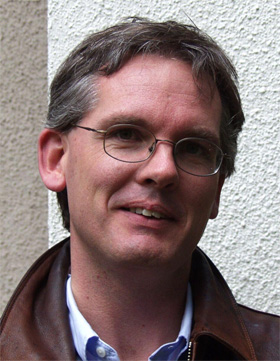 Associate Professor of Linguistics and Biology

Born in 1964 in Freiburg, Germany
Studied Cognitive Science and Cognitive Neuroscience at the Massachusetts Institute of Technology, Cambridge

Timing and the Units of Speech Perception

I extend the concept of local versus global processing, familiar from vision, to the time domain and explore its implications for auditory perception, specifically speech perception. In time, local detail corresponds to short temporal durations (on the order of a single speech segment, 50 milliseconds or less) and global information to durations on the order of syllables (200 milliseconds or more). Theoretical, experimental, and neuroscientific research suggests that this temporal division of labor is mediated by the two cerebral hemispheres simultaneously, but in a different manner. Whereas both hemispheres have available the neuronal machinery to perform analyses on different time scales, the main difference between left and right non-primary auditory areas is in terms of the time constants used to process the input, with right areas having a propensity for longer time constants than left areas. If this view is on the right track, and if different temporal segments are actually "elemental" (primitives for representation and processing of speech), then the basic units of speech perception exist on two time scales. This has implications for the neural basis of speech processing as well as the theory of phonology. I will explore the theoretical foundations of this hypothesis and its predictions and execute experiments to evaluate this proposal.

A Brain's-Eye-View on Speech and Language Comprehension

The structures and mechanisms of the human brain that form the basis of speech and language comprehension are now typically investigated using brain imaging technologies, devices that have captured the scientific and the popular imaginations. The assumption implicit in much of this research is that there exists a straightforward relationship between theoretical entities deriving from linguistic research (e.g. 'distinctive feature') and the biological mechanisms whose action we can monitor (e.g. 'regional cerebral blood flow'). This is wildly optimistic - and probably wrong. In fact, we do not really understand - except at the most coarse level - even rather elementary steps in the transformation from input signal (speech, writing, sign) to mental representation (roughly, words in your head).
To illustrate the complexity of the problem and sketch out a research program addressing some of the issues, I discuss speech perception, providing numerous experimental illustrations. In particular, how is it that one can understand any spoken language at all given that the input signal is continuous (basically, vibrating pieces in your ear) but the mental representations discrete (words in your head)? I introduce a timing-based model in the context of which hypotheses about the fundamental units of speech are explored. The model assumes that there exist in the brain fundamental temporal quanta. Specifically, I argue that auditory information is analyzed in shorter (25-50ms) versus longer (200-300ms) temporal integration windows (time scales commensurate with processing formant transitions versus syllabicity and intonation contours). These temporal windows, associated with specialized neuronal machinery, provide the logistical basis for segmenting the continuous input that in turn interfaces with the discrete linguistic representations in your brain. I provide behavioral and brain evidence that supports (i) that there are temporal integration windows of these sizes and (ii) that these two integration windows are deployed differentially in the left and right hemispheres. If this model is on the right track, syllable-sized units and subsegmental-sized units are equally elemental for the brain's representation and processing of speech.
The broader implication concerns the nature of interdisciplinary explanation. On the perspective presented, substantive progress in cognitive neuroscience of speech and language (rather than inter-disciplinary cross-sterilization) will require unification between the concepts of linguistics and biology, and unification is likely to require an open-minded reexamination of the concepts we take as axiomatic.

The linguistic processes underlying the P600

Speech perception at the interface of neurobiology and linguistics

The cortical organization of speech processing

Mapping syntax using imaging : problems and prospects for the study of neurolinguistic computation

Defining the relation between linguistics and neuroscience

Visual speech speeds up the neural processing of auditory speech