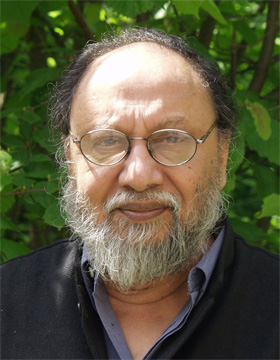 Born in 1937 in Bhagalpur, India
Studied Sociology at Nagpur University and Clinical Psychology at Gujarat University

Memories of a Genocide

In the violence that accompanied the creation of India, Pakistan and Bangladesh (then East Pakistan), roughly one million people were killed and another 20 million uprooted from their centuries-old homelands. This is a study of a) the disowned memories of the violence as a crucial presence in the public life of all three countries, which continue to vitiate the relationships among ethnic and religious communities and the nation-states of South Asia; b) the deeper layers of present-day self-definitions of India, Pakistan and Bangladesh, which cannot be understood without confronting that half-forgotten violence and the silences that surround it; c) the resistance that the violence faced on the ground level; and d) the conceptual frame that the victims, the witnesses and the perpetrators have deployed to understand the violence. The study uses intensive interviews with about 200 persons and a survey of about 1,500 respondents done during the last two years.
In an age of testimony, which has paradoxically seen much cultivated deafness, studies of mass violence have been burdened by a concept of history that rarefies all human suffering and passions and flattens them into elements of ambitious macro-theories that seem to stretch unbroken from a fully-known past to a transparent future. For such a history, some memories are always more equal than others. This study therefore emphasizes the last two issues, particularly the resistance ordinary citizens offer spontaneously, and hopes that when it identifies the cultural and psychological profiles of the genocidal mentality in South Asian cultures, a crucial component of it will be the worldview and theories of violence of the victims themselves. The study basically hopes to listen and to bear witness.

The Silence of Wolves: Preliminary Reflections on the Mass Violence of 1946-48 in South Asia

Like most contemporary genocides, the one that took place in 1946-48 in South Asia, has also produced its distinctive versions of silence. This silence is sometimes cultivated, sometimes involuntary; it is individual as well as collective. A couple, both of whom had lost their fathers during the violence, revealed during an interview that they had not exchanged a word on the subject, despite being married for more than forty years. A village maintained determined, collective silence on the days of the violence, because most of the women in the village over the age of eighty-respected grandmothers now-were abducted during the violence.
The barriers the silence has erected have made it difficult for an entire generation of Indians, Pakistanis and Bangladeshis to avoid any serious study of the violence that accompanied the partitioning of British India. While there are at least two hundred major works on virtually every aspect of the partition that precipitated the violence, some of them running into several volumes, the only two social-science accounts of the violence I have discovered till now are both by North Americans-one, which is a book on violence in general has small sections on the partition, the other concentrates on the social psychology of the twenty million refugees that the violence produced. The former is by the distinguished psychologist Gardner Murphy and his associates, the latter by Stephen Cohen, done as a part of his doctoral work. Only in the 1990s, a trickle of work by Pakistanis and Indians on the nature of the genocide has begun to come out.
In sum, the more than a million dead-the figure could be higher than two million, some have estimated-remain inadequately mourned, at least in public. Even Pakistan, which considers the Muslim victims martyrs for the cause of an Islamic state, has not sponsored anything grand or modest to commemorate their sacrifice.
Nevertheless, the silence itself often speaks out in strange or devious ways. Indeed, it can be argued that the cultures of politics in all three countries are crucially shaped by the invisible presence of the memories of partition. Sometimes, rarely, the invisible becomes visible for a moment. When the well known Indian journalist and human rights activist Kuldip Nayar once asked the father of Pakistan's nuclear bomb, Dr. A. Q. Khan how he could think of targeting Indian cities when his own father, brothers and sisters stayed in the Indian city of Bhopal, Khan replied somewhat chillingly that if Pakistan's survival was at stake, he would willingly nuke India, because he had not forgotten the days when at the time of the partition, hungry and thirsty, he had to run away through the deserts of Rajasthan in western India, to the new state of Pakistan.
Yet, once one begins to explore the details, the silence is does not seem compatible with any quasi-clinical diagnosis of the "inability to mourn." The villains are only partly within one's own self and one does not have to seriously disown parts of the self complicit with the violence. Also, communities are not dead in contemporary South Asia, though they are under attack from the forces of urbanisation and industrialisation; in a survey we did, 27 per cent of 921 of the respondents we interviewed-many of whom the traumatic events have turned into ethnic or religious chauvinists-said that they were helped by, and often survived because of, someone from the enemy community. Some of the respondents say this reluctantly or apologetically, because in the meanwhile they have joined ethnonationalist political parties and other revivalist formations. But they say it nonetheless.
This presentation is a set of preliminary reflections on what the witnesses are silent about and, time permitting, on the possible sources and reasons for the silence. We may also make a tentative attempt to look at some possible sources of resistance to such mass violence in a comparative perspective.

The politics of secularism and the recovery of religious toleration

Secularism and its critics

Time warps : the insistent politics of silent and evasive pasts

The romance of the state : and the fate of dissent in the tropics

An ambiguous journey to the city : the village and other odd ruins of the self in the Indian imagination