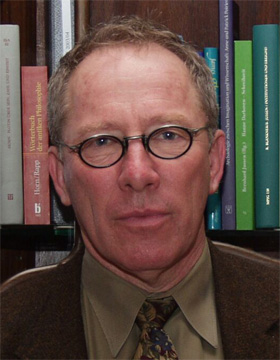 Born in 1945 in Istanbul
Studied Philosophy, History, and Biology at Swarthmore College, at Princeton University and at Nuffield College, Oxford

Names and Memory from Marathon to Maya Lin

My project studies the twentieth-century explosion of names and particularly lists of names on monuments and in commemorative services. The Great War is the crucial moment in this history, but I trace the tradition back to the Greeks (Marathon; the Illiad) and forward to the Vietnam Memorial (itself of course a reworking of Luyten's Thiepval monument on the Somme), the AIDS Quilt organized by the NAMES project, and various Holocaust memorialization projects.

The Dead among the Living Names, Bodies, and Memory from the Great War to our Times

Names are associated with memorial practices already in antiquity: lists of the war dead were produced yearly in Athens; the names of the heroes of Marathon were still visible on stelae when Pausanias visited eight centuries after the battle, a fact made much of at the dedication of the world's first national cemetery at Gettysburg in 1863. There were memorial books of donors kept near the altars of monastic churches and there were the memorial books of medieval Jewish communities. It may be the case, as Wordsworth claims in the first of his Essays on Epitaphs that all men desire their names to be affixed in closed proximity to where their bodies lie. The fact that names and bodies are intimately bound up, the one, in this world, marking and honoring the other, departed to some other world or worlds, is clear. Finally naming-I am thinking here of Simondes' identification of bodies crushed in the collapse of a building by recalling where the living had stood-- is a prototypical feat of memory in the western tradition.
That all said-and this is the first major point of my talk-- there is an explosion of names on the landscape and in memorial practices beginning in the nineteenth century and increasing logarithmically after 1914 and again after 1939. The new cemeteries that followed Père Lachaise were their first home; then came the enormous military cemeteries that mark the battlefronts of western Europe and to a lesser extent central Europe and the middle east displayed millions of fresh names; and more importantly names for the first time after 1920 came to be listed on monuments whose express purpose was their display. The monument as a screen of names was invented at Yypres and in the Somme and found its successors on the Mall in Washington and in hundreds of Holocaust memorials. At the same not having a name-the "Unknown Soldier"-came into being as a category, as the universal body standing for all bodies of a certain sort, precisely because it has lost forever of its name. The NAMES project that produced the AIDS quilt; the reading of names to commemorate the dead of 9/11; the distribution of names to visitors at the United States Holocaust Museum and Memorial are in the tradition I am trying to define here.
The question for the remainder of my talk will pose and respond to the question why a very old way of remembering the dead has become so culturally exigent in our time. I will turn first to negative arguments: although the State manifestly appropriated national cemeteries and the various shrines to unknown soldiers these were not the fruits of its inventiveness. Civil society demanded the recognition of names and provided much of the early infrastructure for gathering and authenticating them. "Democracy" is not an explanation; it is a re-description of the problem. If anything naming in the sense of this talk is constitutive and derivative from "democracy."
I turn then to a rephrasing of the question: what makes names--and the listing of names as a memorial practice-culturally exigent on a vast new scale? I find an answer in the history of names themselves, in the satisfactions of nominalism in the face of seeming ungraspable disaster, and-most importantly-- in a variety of practices that produce and demand a life narrative whose denouement is name that stands for the dead body. This is a talk about the cultural preconditions of naming and memory.

Bodies visible and invisible : the erasure of the Jewish cemetery in the life of modern Thessaloniki

The work of the dead : a cultural history of mortal remains