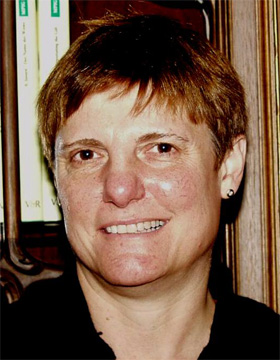 Born in 1956 in California
Studied History, French Literature, and Philosophy at the University of California, Santa Cruz and at Princeton University

Jean-Jacques Rousseau in the Era of the French Revolution: A Study in Cultural Dissemination

My project is a history of the dissemination of Rousseau's works and ideas during the French Revolution that examines both official and commercial editorial and publishing projects. It blends the history of the book with the history of ideas to examine how Rousseau was transformed from the "citizen of Geneva" into the founding father of the modern French nation.<br><br>
Recommended Reading<br>
Hesse, Carla. Publishing and Cultural Politics in Revolutionary Paris, 1789-1810. Berkeley: University of California Press, 1991.<br>
-. The Other Enlightenment: How French Women Became Modern. Princeton: Princeton University Press, 2001.<br>
Hesse, Carla and R. Howard Bloch, eds. Future Libraries. Berkeley: University of California Press, 1995.<br><br>

Revolutionary Rousseaus - the Story of his Editions after 1789

This paper attempts to answer a simple question: How were Rousseau's ideas made manifest during the decade of the French Revolution? Rousseau is taken as a case study-a special one indeed-of how a counter-cultural movement became an over-the-counter culture. It fits more broadly into my continuing interest in the cultural consequences of the French Revolution and the foundations of modern literary institutions and practices. At a methodological level I would like to argue for the on-going relevance of historical bibliography as a foundation for cultural and intellectual history.
Studies of pre-revolutionary Rousseauism for many years (since Daniel Mornet) suggested that prior to 1789 it was Rousseau's romantic, rather than his political or philosophical works that received the widest distribution and reception and that it was only after 1789 that the Social Contract was widely known in France. This picture has recently been entirely been revised by the careful work of bibliographers.
But what was the fate of Rousseau's work in the Revolution itself. There has been no systematic study to date. My preliminary findings are a follows: 1) There was a dramatic expansion in the publication of Rousseau's works in the decade 1789-99; 2) That this expansion was a result of both government initiatives and market forces; 3) The this expansion reveals a nationalization of Rousseau in two senses: a) a shift of the locations of his publishers from the Protestant crescent along French border to Paris, but also an expansion of provincial publishers as well. Rousseau was transformed, thereby, from the "citizen of Geneva" into the founding father of the French Republic.
Four other important findings are noted: 1) the rise of Rousseau in smaller formats and little extracted editions tailored to specific social groups-Rousseau for women, for peasants, for sans-culottes; 2) The enduring popularity of the romantic works as opposed to the political ones in the early years of the Revolution: Emile and the Nouvelle Héloïse as opposed to the Discourses and the Social Contract; 3) A 'Thermidorian' revival of interest in Rousseau's political writings; and 4) A tension between the official government initiative to produce a definitive edition of Rousseau's work-an edition which stressed the unity of Rousseau's thought-with the proliferation through the market of multiple variants of Rousseau which used para-textual strategies (prefaces, editorial choices, notes, etc.) which often resulted in paradoxical or at least contradictory philosophical and political ends.
I suggest in conclusion that the revolutionary era-through both textual and editorial practices-inaugurated the two great traditions of interpreting Rousseau which still orient Rousseau studies to this day: on one hand we find the Republican tradition, beginning with Sebastien Le Mercier, and descending through Cassier and Starobinski, that aim to locate the unifying principle or logic of his corpus. On the other hand, we find what I would call the 'liberal' tradition, descending from Diderot and Mme de Staël to Jacques Derrida and Paul de Man, which insists on the paradoxical or aporetic character of Rousseau's work.

Bodies visible and invisible : the erasure of the Jewish cemetery in the life of modern Thessaloniki

The other Enlightenment : how French women became modern

Publishing and cultural politics in revolutionary Paris : 1789 - 1810 Studies on the history of society and culture ; 12