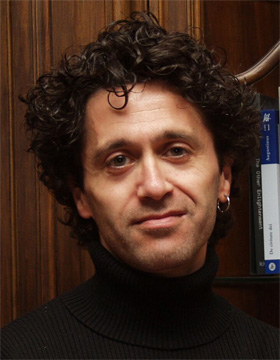 Born in 1964 in France
Studied Comparative Literature at the University of California, Berkeley

Much like the enemy in relation to the friend, hate remains less of an object of reflection than love. There are many treatises entitled "de amicitia", but none entitled "de inimicitia". More pointedly, to the extent that hate has been an object of reflection, the tendency has been to focus on hate toward the other rather than self-hate. A significant exception has been, of course, Jewish self-hatred. Following my research on the enemy, and on the possibility of thinking together the Jew and the Arab, I want to elaborate on the question of affect as a political moment in the constitution of identity, whether individual or collective. I focus on three moments in particular. First, an examination of Jewish self-hatred (following the work of Sander Gilman) and its resonance in Zionist and Israeli culture (focusing, for the most part, on literature and on the work of Nobel Prize laureate S. Y. Agnon). Second, taking Cornelius Castoriadis' suggestion that Jewish self-hatred is only one instance of a common human phenomenon, I want to engage the question of group constitution in national identity (focusing on North-African Arab and French nationalisms). Third, I want to revisit the question of hate-speech that has gained much attention in the US in the past two decades and consider the contribution made by thinking psychoanalysis and politics together. The question of narcissism, and most specifically "negative narcissism" found in Freud, Klein, and Green, in particular, provides the guiding vector.

Recommended Reading
Anidjar, Gil. "Our Place in al-Andalus": Kabbalah, Philosophy, Literature in Arab Jewish Letters. Stanford: Stanford University Press, 2002.
-. "Once More, Once More: Derrida, the Jew, the Arab." In Acts of Religion, edited by Jacques Derrida, with an introduction by Gil Anidjar. New York: Routledge, 2002.
-. The Jew, the Arab: A History of the Enemy. Stanford: Stanford University Press, 2003.

"Zur Moslemfrage". A Note on the Sublime

Shakespeare did not invent the Semites, although he did write about a Jew and a Moor, both of whom were black and from Venice, as the title of the plays suggest. Marlowe, Shakespeare's contemporary, did not invent the Semites either. But he did write the following lines in which a Jew addresses a Moor:
Why this is something! Make account of me
As of thy fellow; we are villains both:
Both circumcised, we hate Christians both.
Be true and secret, thou shalt want no gold.
From theology to politics, from secularization to racial and colonial policies, Europe has at once affirmed and denied the proximity it repeatedly perceived or imagined between the Jew and the Muslim. In Marlowe as in Shakespeare, the Jew was the internal, theological enemy. The Muslim, his theological legitimacy massively denied, was considered chiefly an external, political and military enemy. Today, the terms have only slighly changed. Turkey, for example, functions as the external Islam which might be allowed "inside" or not. The divide between religion and politics, at any rate, is maintained in similar terms. Judaism and the Jewish state are characterized by their acclaimed political place in the modern world (as the model minority, if a threatened one, or as "the only democracy in the Middle East"), while Islam, now conceived exclusively as a religion, should refrain from political claims in order to join the community of enlightened nations. Islam, so the argument goes, should not become "political."
Since the Middle Ages, then, every statement or image engaging either Jew or Muslim, has always been a document about both Jew and Muslim. Until today, such documents are always about asserting that there is no connection between the Jew and the Muslim. The persistent and strategic separation of the two questions remains unacknowledged. And with dire consequences: no essential connections are acknowledged between Islamophobia and Judeophobia, between Orientalism and anti-Semitism. Except for vague statements about racism and its comparable forms, or about historical and structural parallels, any explicit connection is rather dismissed or discouraged, if not outrightly condemned. It is as if there were two questions rather than one. For it is not just that these two minorities (among many others) have attained increased, if also unequal, visibility. Not just that historical and colonial legacies are still being played out and even acted out. In the final analysis, the one and only question is that of the continuous role played by Europe in perceiving and "managing" its minorities, whether at the level of policy or at the level of discourse and phobias.
The association - to the point of collapse of differences - of Jew and Muslim (which I refer to here, for reasons I will explain, as "the Muslim Question") did not take off in the 17th century. Yet, there was one, unique and paradigmatic figure of this association: the Semites are this 19th-25century European invention to which I will attend in my paper. More specifically, I will argue that with his notion of "religions of the sublime," it is G.W.F. Hegel who provides a key formulation for this newly constituted object.

The Jew, the Arab : a history of the enemy Cultural memory in the present

"Our place in al-Andalus" : Kabbalah, philosophy, literature in Arab Jewish letters Cultural memory in the present