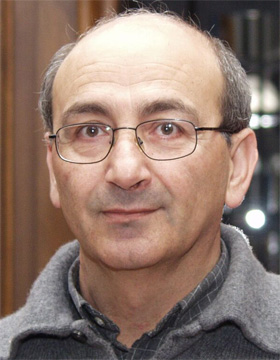 Fellow of the West-Eastern Divan

The "West-Eastern Divan" is a project promoting an understanding of Middle Eastern literatures in Germany and vice versa. During an initial period of three years, an opportunity will be given to writers from Arab countries, Iran, and Turkey and from Germany to meet so that they can acquaint themselves not only with one another, but also with their respective environments. They will travel to each other's countries, give joint readings, and write about literature and the world of their counterparts, each in his or her own language.
The Wissenschaftskolleg zu Berlin invites writers as guests for a period of 4 to 6 weeks to support the project in the framework of its Working Group Modernity and Islam in cooperation with the Berliner Festspiele, the Haus der Kulturen der Welt, and the Goethe Institute Inter Nationes. The project and the following writers are supported by the Kulturstiftung des Bundes (Federal Cultural Foundation of Germany).