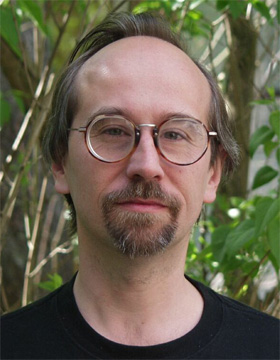 The origin of life can be understood in terms of chemistry and dynamics. The dynamical aspect focuses on the coexistence of information-carrying, replicating entities. Such precursors to genes presumably competed with other, which meant a big hurdle for the evolution of a primitive genome. Several suggestions have been put forward to overcome this difficulty, applicable to various stages of a plausible (although partial) scenario for the origin of life. I plan to summarize the views and models developed in my group in form of a monograph with the presumptive title: Dynamics of the origin of life.

Why are there four letters in the genetic alphabet? A celebration of the fiftieth anniversary of the Watson-Crick model of DNA

R.A. Fisher once remarked that in order to find out the answer to the question "Why are there only two sexes?" one should contemplate the consequences of more than two. A similar strategy seems adequate, I shall argue in the talk, for the topic of the size of the genetic alphabet. Currently the genetic alphabet consists of four 'letters': the inherited message in DNA is written using just these letters. Recently, organic chemists have been able to synthesize novel base pairs which could be incorporated into nucleic acids. There are theoretical, experimental and computational reasons to believe that having four base types is a frozen relic from the RNA world when ribonucleic acid (RNA) was the genetic as well as the enzymatic material, more than 3 billion years ago.

I will present the reasoning and the data following the structure below; with an attempt to use in the talk the minimum of technical language. In the end we shall see that alien life forms could well have a genetic material using a different alphabet, although constraints on alphabet size should be widely applicable.

Draft structure
1) Why bother? Are there any alternatives? Yes, there are.
1.a. The Benner (1990) suggestion: an extended alphabet
1.b. Other alternatives
2) Conditions for alternative base pairs. Successful insertion into DNA is not enough: replicability is the key issue
3) Extended alphabets in an RNA world.
3.a. Theory: The effect of alphabet size on replication rate and average metabolic efficiency. The nature of the optimum.
3.b. Data: RNA catalysts built of two, three and four nucleotides.
4) The contribution from error-coding theory.
4.a. Theory: alphabets with odd, even, and odd parity.
4.b. Calculations: thermodynamic and quantum chemical calculations refine and concur
5) Alphabet size and evolvability: computer simulation
6) Outlook: what is needed and what may be achieved
6.a. Less choosy replicases/polymerases
6.b Systematic survey of replication and catalytic efficiency of replicators built using different alphabets.
6.c. Implications for life elsewhere.

Why are there four letters in the genetic alphabet?

On the origin of language : utility and enchantment

The major transitions in evolution

Toy models for simple forms of multicellularity, soma and germ

Coding coenzyme handles : a hypothesis for the origin of the genetic code

Molecular variation and evolution of viruses