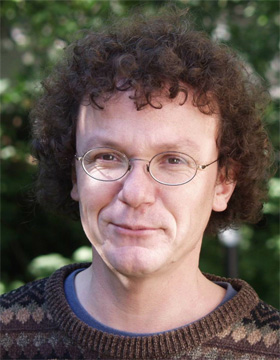 Born in 1962 in Berlin
Studied Neurobiology and Behavior at Cornell University and Neuroscience at the University of California, San Diego

Remarks for Other Fellows
I also have a strong interest in animal communication and neuroethology. My web site is: http://darwin.bio.uci.edu/neurobio/Faculty/Striedter/striedter.htm

An Evolutionary Perspective on the Human Brain

Evolutionary neurobiology is sometimes regarded as a rather speculative exercise, consisting mainly of attempts to reconstruct and explain unique historical events. This is too limited a view, however, for brain evolution is governed by at least some general principles, or "laws", that can be used to comprehend how brains evolve. In today's talk, I begin with a synopsis of my overall project, and then focus on a more specific question: what is it about human brains that makes us different from other primates?
This question is as old as it is controversial. T.H. Huxley and numerous other comparative neuroanatomists have argued that human and ape brains are essentially similar to one another, but these authors have generally struggled to explain why apes and humans differ so much from one another behaviorally. On the other hand, Richard Owen and others who claimed that human brains differ dramatically from those of other primates, have often failed to back up their assertions with evidence. Nowadays, most neurobiologists seem to agree that the differences between human and ape brains are "only quantitative", but at what point do quantitative differences become qualitative? And could it not be that we focus on quantitative differences merely because they are easier to measure and explain? In response to these questions, I contend that quantitative differences between ape and human brains are, and indeed must be, linked to qualitative differences in brain connectivity and function.
The most obvious difference between ape and human brains is the greater absolute size of the latter, which entails a significant increase in neuron number. Theoretical considerations suggest that as neuron number increases, the cohesion among these neurons (measured as the number of steps it takes to connect any one neuron to any other) must decrease. Therefore, one would predict that in humans the various brain regions should, on average, function more independently of one another than they do in other primates. Indeed, the data confirm that in humans the two cerebral hemispheres are less densely interconnected and more functionally asymmetric than in other primates. This transition from symmetric to asymmetric function follows from quantitative changes in connectivity, but is a qualitative change.
A second major differences between human and ape brains is that the neocortex is much greater, relative to the rest of the brain, in humans than in apes. Again, theory suggests that, as the proportional size of the neocortex increases, neocortical axons should "invade" new brain regions. Indeed, several lines of evidence indicate that "connectional imperialism" was an important factor human brain evolution. For example, only humans possess projections from the neocortex to motor neurons that control the vocal chords, and these projections are required for human speech. Similarly, only primates with a very large neocortex have projections from neocortex to spinal cord motor neurons that innervate the hand, and these projections are required for fine hand control. These evolutionary "invasions" of lower motor neurons by the neocortex were accompanied by an atrophy of other descending motor systems and, collectively, led to major qualitative changes in brain function.
In conclusion, one can say that human brains differ from those of other primates in both quantitative and qualitative respects. Qualitative changes in brain connectivity and function are difficult to study, but they are arguably the most important aspect of brain evolution, for without them it is difficult to comprehend why human behavior differs so much from that of apes.