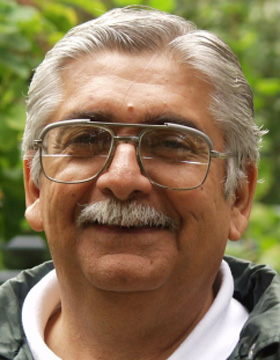 Born in 1939 in Zanzibar
Studied African History at the School of Oriental and African Studies,
University of London and at the University of California at Los Angeles

History has often been national, centred on the exploits of mankind on land, or uni-dimensional histories of the expansion of the capitalist world economy. However, half of mankind lives within 80 km of the seas, strategically located at the confluence between the continental and maritime environments, able to exploit both economically and to be fashioned by them socially and culturally. Over the longue durée, intense economic, social and cultural interactions have developed across these oceans to create greater social and cultural unities. The monsoon system and the wooden dhow facilitated such intercommunication. They carried commodities, crews and passengers, predominantly men, encouraging social integration, with wide-ranging cultural consequences on the language, dress, cuisine, music and dance, and systems of beliefs and traditions, creating new syntheses in many of the littoral societies all around the Indian Ocean.

Socio-cultural interaction across the western Indian Ocean over the longue durée.

The sea has often been seen as a divide and an obstacle to human communication, but nearly half of mankind lives within 80 km of the shore. In the Indian Ocean, as in the Mediterranean, it has been used by the littoral people to interact with people across the ocean for thousands of years. The apparently flimsy wooden dhow, with its characteristic lateen sail, and the unique monsoon system of the Indian Ocean, have en-abled coastal people to cross the ocean with ease.

As Richard Hall has put it, 'the lives of ordinary people ... were always ruled by ... the perpetual monsoons rather than by ephemeral monarchies.' Every monsoon dhows carrying mundane commodities as well as luxuries sailed across the ocean in all directions; but they also carried people, predomiantly men, passengers, sailors, and even slaves, who were by no means merely 'rolling stones.' At every landfall they interacted with the local people, and not only at the marketplace. They intermarried and influenced each other's language, cuisine, and culture in general. The commodities exchanged included not only those of mass consumption but also the knickknacks that give cultures their specific flavour. They engaged in pedlar trade that may be considered uneconomic, but it constructed a dense web of socio-cultural interactions encompassing the western Indian Ocean and beyond. Nor was maritime influence confined to the coast but extended into the hinterland in concentric circles, some political, some economic, and some cultural.

Globalisation with a difference : an overview

The Indian Ocean : oceanic connections and the creation of new societies

Between two worlds : the Littoral Peoples of the Indian Ocean

The Zanzibar House of Wonders Museum : self-reliance and partnership ; a case study in culture and development