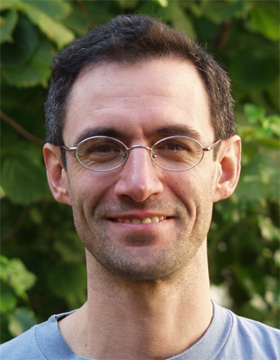 Born in 1965 in Madrid, Spain
Studied Zoology at Oxford University, Neuroscience at the
Université Claude Bernard, Lyon I, and Theoretical
Physics at the Ecole Normale Supérieure de Paris

Uncertainty and the Trade-off Between Offspring Number and Quality

Individuals with a fixed reproductive budget can allocate their resources into few relatively large offspring or numerous small offspring. The goal of this project is to study the effects of environmental stochasticity on the offspring size-number trade-off. In particular, this project will consider to what extent occasional adverse conditions should lead to an increase in investment per propagule when the extra investment serves as insurance and is rarely used. The project should benefit from collaboration with economists within the focus group "The Sciences of Risk" because the problem is similar to the one faced by potential investors who must keep some reserve capital frozen.

Remarks for Other Fellows
Originally trained as a theoretical physicist, I did a D.E.A. in neurophysiology and worked with neural networks before doing a Ph.D. in zoology. The thesis dealt with the perception and memory of durations and included experimental and theoretical work. At the same time, I became interested in the problem of parent-offspring conflict. (In most species with sexual reproduction, parents are selected to invest in their offspring less than the offspring are selected to demand.) I studied siblicidal species and offspring's signalling of need to their parents. Evolutionary game-theory models are used to look for equilibrium points in the evolutionary dynamics. It is difficult to derive equilibrium points analytically and to study their evolutionary stability. I have therefore used computer simulations to study these problems. Besides, we have demonstrated that the signalling strategies that young use depend on their feeding history, a plasticity that is not considered by the models and that future theories need to take into account. An old interest in ecological problems led me to join the Netherlands Institute of Ecology, where I started working on the effects of competition for nutrients and its implications for the evolution of seed size. This will be the subject of my research at Wiko.

The evolution of family planning

Most biologists today accept that natural selection is one of the main forces driving evolutionary change. Simply stated, Darwin's theory of evolution through natural selection says that, if individuals with a certain trait enjoy a higher reproductive success than individuals lacking that trait, the proportion of individuals possessing such trait will increase in future generations. Family size is an obvious candidate for being subject to natural selection. A rushed interpretation of Darwin's ideas might lead us to expect the evolution of ever larger families. The existence of species producing relatively few offspring might therefore seem maladaptive. But on second thoughts it is clear that natural selection is a long-term process. For a trait to be selected, it is not sufficient that individuals possessing that trait have many offspring: their offspring must also be reproductively successful. The first part of my talk will review briefly the factors that favour reproductive restraint and the methods that can be used to predict the optimal reproductive strategy for a certain environment.
The task of natural selection, producing species with the optimal family size, is particularly difficult in species that reproduce sexually, due to the existence of genetic conflicts of interest between the different family members. That both parents should have different interests probably comes as no surprise. But, due to the shuffling of genetic material during sexual reproduction, a genetic conflict underlies the relationships between parent and their offspring, and between siblings.
The genetic conflict between parents and their young has important implications for the optimal family size. This is particularly clear when we consider species where larger young have the inclination to dispose of their smaller siblings. Such behaviour is referred to in the literature as "siblicide". (It was originally called "Cainism", but the term did not stick.) There are a number of different scenarios that can lead to the evolution of siblicide, and there need not be any parent-offspring conflict over its occurrence. Although, by and large, there is a conflict of interests between the siblicide and its victim! When there is parent-offspring conflict over siblicide, however, parents may evolve a number of strategies to minimise the cost that they incur from siblicidal behaviour. Some of these strategies involve changes in brood size or increasing their per capita allocation to a point where it does not pay their young to commit siblicide.

Why are so many bird flowers red?