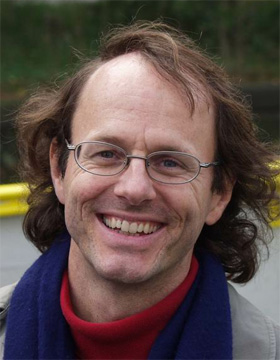 I'm writing a book entitled "Vertebrate Vocal Production: Functional Morphology and Evolution". This book will synthesize my reading and research on animal vocal production over the last eight years. My broad interest is in the evolution of language and speech. When I entered this field as a graduate student I was amazed by how little was known about animal sound production (compared to a very thorough understanding of human speech). I thus decided to try to answer some basic questions in this field as a post-doctoral fellow in the Harvard/MIT speech science program. This research has been more revealing and fascinating than I predicted, revealing deep similarities between human and animal vocal production, and my book will summarize what is currently known about this for a broad audience.

Remarks for Other Fellows
I look forward to meeting you all. You're going to love the Wiko!

The Evolution of Language

For many years the evolution of language has been seen as a disreputable topic, hopelessly mired in fanciful "just so stories" about language origins. However, in the last decade a new and powerful synthesis of modern linguistics and neo-Darwinian evolutionary theory has begun to make important contributions to our understanding of the biology and evolution of language, and this highly interdisciplinary subject is seen by many scientists as increasingly promising.
I will review some of this recent progress, concentrating particularly on the value of the comparative method, which uses data from animal species to draw inferences about language evolution. I will show how data concerning a wide variety of species, from lungfish to lions, can increase our understanding of the anatomical and neural mechanisms underlying human spoken language, and how bird and whale song provide insights into the ultimate evolutionary function of language. I will first discuss the "descended larynx" of humans, a peculiar adaptation for speech that has received much attention in the past, and show that it is neither uniquely human nor necessarily tied to speech production. Then I will turn to the neural mechanisms underlying speech, pointing out the difficulties animals apparently experience in perceiving and understanding abstract, relational and hierarchical structure in sounds, and stressing the importance of vocal imitation in the evolution of a spoken language. Turning to ultimate function, there is a surprising lack of attention among scholars to the selective pressures that led to human language. I will suggest that communication among kin (especially between parents and offspring) played a crucial but neglected role in driving language evolution.
Finally, I will briefly discuss phylogeny, stressing the difficulty of testing any theory about the speech abilities of extinct hominids, and comparing two broad hypotheses that seem to offer plausible routes to human language from a non-linguistic chimp-like ancestor. Looking towards the future, we can expect data from neuroscience, linguistics, animal communication, cognitive ethology, music theory, child development and computer modeling to provide valuable insights into language evolution, and that animal data will provide a richer, more interdisciplinary understanding of our most distinctively human trait: language.

The biology and evolution of music : a comparative perspective

The faculty of language : what is it, who has it, and how did it evolve?

The descended larynx is not uniquely human

Without breath and without song?

The evolution of speech : a comparative review