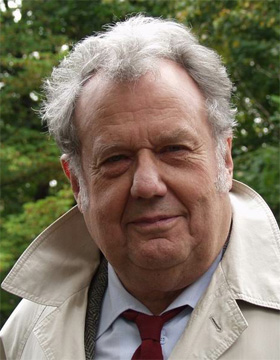 Born on October 12, 1933 in Haarlemmermeer near Amsterdam; passed away on March 12, 2018 in Amsterdam.
Studied History and Philosophy at the Universities of Groningen,
Amsterdam, Berlin, Berkeley, and Yale

The Tenacity of Historical Patterns and Modernization

Concerning European integration, I hope to finish a "Eurogram" with the following chapters:
1) What historical factors enhanced integration?
2) Crucial changes in the integration climate since the end of the Cold War
3) The unique/incomparable growth and structure of the EC/EU. The limited use of integration theories
4) EMU
5) Central position of Germany within the EU
6) On the effects of the future enlargement: "die Ver(w)östlichung Europas".
7) A common foreign and security policy?
8) Relations US - EU. A widening Atlantic? More entangled and further apart?
9) A growing EU-aversion among the population? Renationalization?
10) "Überforderung der EU?" Too many great challenges at the same time

The main common theme of all what I hope to write/finish is: The tenacious patterns of continuity, even in periods of rapid change. Or: the "odd couple" of, on the one hand, modernization and, on the other, the impact of a "heavier (dead) hand" of historical patterns in Europe after the Cold War.

Other specific themes:
1) What do "borders" still mean in present-day Europe?
2) Territorialism versus globalism. The rise of virtual borders. (Cf. Charles Maier's essay in Transit 14 and his speech in Florence 1999 "Trennlinien in Europa")
3) New asymmetries in the EU. On the growing differentiation between larger and smaller member states
4) The loss of status / the devaluation of smaller states since 1990
5) On the road to a directorium in the EU?
6) Today's recycling of political concepts. On the renewed use of outdated/antiquated ideas
7) What could be the meaning - if any - of the expression "Ungleichzeitigkeit des Gleichzeitigen" (Ernst Bloch)?

1. What the EU is and what it isn't. How far did the integration get?

The EU is no federation, nor a confederation; it is a federation of national states, "Eine Staatendemokratie" (Chr.Meier).
The EU is not a sovereign state or a united states.
No "we, the people of Europe".
It has no constitution. But it has a few fundamental treaties.
It has an acquis communautaire of 80.000 pages: all the EU regulations etc.

"Less than a state, ... more than a confederacy" (Martin Walker).
It has no government, yet there is governance, a kind of administration without statehood.
It does have a parliament, but this is seriously handicapped because it isn't counterbalanced by a government.
There is no europeanised system of political parties with matching European voting lists behind this parliament: no lists of European parties for the elections to the European Parliament.

The EU has no standing army or police force (no monopoly over the ultimate use of violence, a key criterion in Max Weber's traditional definition of statehood).

No civil society with "Bürgerbewegungen".
"How to create a European public?" is still an open question.A demos as a recognizable category, as a self-recognizing body hardly exists. There is no European people with a language of their own nor lingua franca.

No public opinion, no European newspaper, t.v. or radio station, not one "Öffentlichkeit", but 15 national "Öffentlichkeiten", no "Kommunikationssystem", no European political discourse, no democratic substance, as all interaction between institutions and citizens is non- existent.

The EU has no tax system of its own (in budgetary terms, EU remains "a rather minor power, disposing as it does of less than 1.2% of the gross domestic product of countries that themselves gave their parliaments and governments control over 40% or more of their GDP.
The EU does form a single market and has since 1999 also a common currency, but: only one side of the coins is European, the other remains national. A clear symbol.
Despite the common market and valuta there certainly is no common economic policy.

It is too hard to identify with Europe since one can only belong to it through the citizenship of one of the memberstates. The emotional function of belonging to a nation state has not been superseded by a sense for Europe. As the saying went in 19th century Germany: "Ein Zollverein ist kein Vaterland".

There is no Eurohymn, just a tune from Beethoven's Ninth Symphnony ( Schiller's Ode to Joy). One can hum but not sing along.
There is a flag though, with an ever growing number of stars. Each star a nation. It reflects the cultural diversity of Europe.

Despite or because of continuing internationalization there is a growing campanilismo: the direct local, or regional environment in which people live, becomes more important.

"The term "European" has not been officially defined. It combines geographical, historical and cultural elements which all contribute to the European identity. The shared experience of proximity, ideas, values and historical interaction cannot be condensed into a simple formula and is subject to review by each succeeding generation. The Commission believes that it is neither possible nor opportune to establish now the frontiers of the European Union, whose contours will be shaped over many years to come" (Cris Shore).

2. What makes the integration process so complex, so full of paradoxes / contradictions?

1) European Integration is an elite project, ab initio undemocratic, though it is meant as a coalition of free democratic countries.
The former president of the EU Commission, Jacques Delors, spoke of a benign type of despotism. "Europe is too serious to be left to the people", he said. Integration within the Community was a product of agreements between Europe's political elites.
The choice has been an either or: integration without democracy or a strong voice of the people in the participating states and probably no integration.

2) A more transparent EU is promised again and again at EU summit meetings, after the European leaders have just made the EU structure even more opaque by increasing the complexities of the Union that make the EU- text even less readable.

3) Limits of integration: harmonisation of e.g. the different social systems could break up the Union, as the welfare state would be reduced to a minimum of social security. The same could be true for taxes.

4) Another very important paradox that gives us insight into the incremental / creeping process of the EU concerns the self-enlarged position of the European Court of Justice, as part of its constitutional architecture.
The European Court of Justice expanded its own jurisdiction.
It is an example of "illegal" self-enlargement of the institutions.
"Illegal" means here: not on the basis of a constitution, political decisions, or other legitimation.
The national states have accepted the creation of a supranational legal order that was not in any obvious way provided for in the founding treaties.
The ECJ has successfully "transformed the EC into a nascent federated policy".

The self-enlargement is not restricted to the ECJ:
"...Europeanization is an inherently circular and self-reinforcing process. EU institutions and laws are continually generating their own environments and conditions for expansion... the EU as both cause and effect of itself, begs the fundamental question of what it in fact is".( Shore)

5) The concept of "Europe" may have originally been mainly cultural, but culture was originally left out of the integration programs.
The founding fathers had good reasons to leave culture out as a means of integration.

Another paradox: it is part of the European mythology that the founding fathers already had been staunch integrationists before 1945.That was not true at all; certainly Jean Monnet has been rather late converted. The same is true for the Belgian founding father Paul Henri Spaak. The experiences during WW 2 played an important role in their conversion.

6) The Paradoxes of the Treaty of Maastricht (1991/92).
"It said nothing about enlargement, nothing about the transformation of Europe as a whole... Maastricht in no way prepared Europe for the avalanche that was about to break in the other half of the Continent" (Norman Davies, Europe, p. 1122).
Lord Dahrendorf rightly said of Maastricht: It is the "Zukunft von Gestern": yesterday's future.

The eastern enlargement makes the question very urgent: "Where does Europe stop?" During the Cold War that question was hardly relevant.

7) Concerning the recent discussion on EU negotiations with Turkey: is it not paradoxical that in a secularised Western-Europe, references to Christian heritage are now frequently used as an argument against membership of Turkey?

Ironically, no other EU member is now more enthusiastic about Turkey's candidacy than its old enemy Greece what is convinced... that their relations can move towards normality only in the European context, just as a joint commitment to integration helped France and Germany to heal the wounds of two world wars.

In the discussion about Turkey the Berlin historian, Jürgen Kocka, came up with what I would call the paradox of the EU borders.
Kocka: "Wenn Europa eine politische Union sein will, muss es Grenzen haben".
The EU should not become overstretched, then it will not be "handlungsfähig", he said. On the other hand Kocka also pleads for "eine Gradualisierung der Grenzen" with those states that are not going to be members."Den abgestuften Beziehungen zwischen den Mitgliedsnationen entspricht eine Gradualisierung der Grenze nach aussen".
How to combine the two: on the one hand "Gradualisering" ( gradation) of borders, and on the other hand clear borders needed for a political union and also for a clearly defined EU identity for its citizens?

"Borders go down, walls go up". When next year the EU will be enlarged to the east, lots of borders will be removed (e.g. between Poland and Germany), but other borders, those to the east of the new member states, will become more sealed off (more tight). "Eine schärfere Abgrenzung" which is called the Belgian border. This is cynical, especially there where Poland has just reconciled with countries like the Ukraine.
Thus, the paradoxical effect of European unification has been an intensification of what has been called "cultural fundamentalism" or Eurocentrism, "a sort of higher xenophobia directed against Muslims and the modern version of the Mongol hordes (Shore).

8) The absurdity of the Common Agricultural policy
The dialectics of the great successes of the integration proces (the common agricultural policy was one of the first great successes of the EEG) That has become an albatros from which it is difficult to liberate the Union. About 50% of EU funds are spent for this policy, from which only 4 % of the population benefits.

9) European foreign and security policy.
The EU has not yet a common policy on those crucial terrains. One of the main reasons is that harmonization of foreign policy and defence interests has hardly begun.

Javier Solana's paradox: the present conflicts between the EU and Washington "may push the EU to become much more of an actor in the world. We have an obligation to do so", as the high EU representative Solana recently stated.
But where could he see that impulse? The reduction of the defense budgets in many EU member states goes even on in these insecure times.

Berlin and the recycling of German symbols : an introduction

The non-role of intellectuals in present European politics