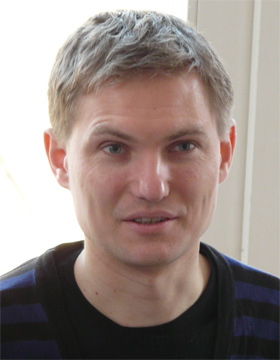 Born in 1978 in Berlin
Studied Biology in Freiburg, Bonn, and Cologne and
at the Ècole Normale Supérieure de Lyon

I will try to identify general principles regarding structure-function relationships in neural networks acting in the sensorimotor loop. To this end I will focus on comparing small, identified biological neural networks with a range of neural networks developed via artificial evolution. By changing structure and parameters of the neural networks, artificial evolution allows for a systematic exploration of possible neural structures and therefore for a systematic investigation of the role of different sensory inputs on the generation of movements. When a multitude of functional controllers have been derived under different conditions, they will be analyzed and compared on multiple levels: 1) behavioral level, 2) structural level (usage of specific sensors, connectivity, network size, lesions, etc.), and 3) dynamical systems level. Comparison of controllers derived under different boundary conditions (e. g. muscle or environment properties) is expected to highlight structural constraints of neural controllers that are specific to the movement system and to yield insight into diverse functional modules. Comparison with known biological networks will, firstly, support or reject biological hypotheses and, further, allow the formulation of new hypotheses. If time permits, the derived control principles will be tested on a physical robot.

Twickel, Arndt ( 2007)
Dynamical systems in the sensorimotor loop : on the interrelation between internal and external mechanisms of evolved robot behavior