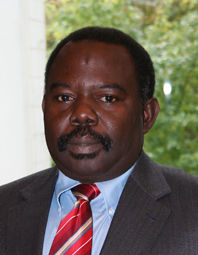 Born in 1960 in Jos, Nigeria
Studied History and Literature of Religion at Northwestern University, Evanston, Ill.

This project has a clear normative goal of expanding the vocabulary of Islamic liberalism in contemporary Nigeria. In the discourses of what has been variously termed: "liberal Islam/Islamic liberalism", "progressive Islam", "reformed Islam", and "Islamic modernism", critical observers have noticed the problem I address in this study. Muslim liberals have easily shown that Islam is consistent with acceptance of democracy, human rights, rights of women and minorities, freedom of thought, etc. However, when Muslim intellectual opponents quote Qur'anic verses to challenge Muslim liberal arguments on these issues, Muslim liberals seem unable to mount authentically Islamic rebuttals. Hence the question arises: Can Islamic intellectual traditions provide discursive resources for constructing effective Islamic rebuttals against Islamic fundamentalist arguments on the topical issues facing Muslims?
I address this question by examining recent reforms in the application of Islamic law in Nigeria. These reforms have predictably sparked contentious debates between Muslim proponents and non-Muslim opponents. But the more interesting debate has been between Muslim critics of the application of "full sharia" and their Muslim opponents, which has been raging on in diverse arenas: Nigerian newspapers, Nigerian websites, international media, academic conferences in and outside of Nigeria, political rallies, courtrooms, mosques, and classrooms of Nigerian universities and colleges. I hope to provide intellectual capital to strengthen Muslim voices for tolerance in Nigeria.

Expanding the Vocabulary of Islamic Liberalism

The Moroccan sociologist Fatima Mernissi opens the introduction to her famous book, "The Veil and the Male Elite" (1991), with a brief account of an episode at her local grocery store that encapsulates the problem I address in my WIKO project. She recounts how her simple question "Can a woman be a leader of Muslims?" shocked her grocer, and led one customer to invoke God's protection against "the catastrophes of the times!" She adds that a schoolteacher, the third person in the grocery store at the time, "stood slowly caressing his wet mint leaves, and then hit me with the Hadith [prophetic tradition] that he knew would be fatal: Those who entrust their affairs to a woman will never know prosperity!' Silence fell on the scene. There was nothing I could say." Mernissi describes her reaction thus: "I discreetly left the grocery store without another word. What could I have said to counterbalance the force of that political aphorism, which is as implacable as it is popular [italics added]? Silenced, defeated, and furious, I suddenly felt the urgent need to inform myself about this Hadith, and to search out the texts where it is mentioned, to understand better its extraordinary power over the ordinary citizens of a modern state."

A Nigerian illustration of Mernissi's predicament shows remarkable similarities. Analyzing the various reactions to the recent developments in Shari'a application in Nigeria, Ayesha Imam [2004] observes that: "The dominant discourse was that to criticize-even in the mildest ways-the Shari'anization project was to be by definition anti-Shari'a, anti-North [the predominantly Muslim region of Nigeria], and anti-Islam." Criticism of any aspects attracts accusations of apostasy, raising the specter of the death penalty and leading Ayesha Imam to note that in the "context of vigilantes and the failure of the state authorities to maintain security and the rule of law, these accusations are [a] very real threat, [and they] raise the likelihood of physical attack, if not actual death." The threat of vigilante violence has forced some Muslim critics of the Shari'a project to recant their earlier skepticisms, and many more to resort to self-censorship. The Mernissi Predicament is by no means restricted to Morocco and Nigeria; it is, in fact, quite common in the debates raging globally among Muslims. These debates are taking place in mosques and Islamic seminaries, universities and research centers, media outlets, courtrooms, academic journals and books. Constantly featuring in the debates are diverse and clashing viewpoints of Muslims variously labeled as "secularists," "modernists," "reformers," "moderates," "activists," "liberals," "neoliberals" "salafists," "fundamentalists," "militants" "jihadists" "conservatives," "traditionalists," "neo-traditionalists," etc. Throwing these labels has become an important part of the discursive repertoire in the raging debates among Muslims, and therefore the labels deserve serious critical reflection.

Charles Kurzman (2002) observes that a central preoccupation in the discourses of Islamic modernists since the middle of the nineteenth-century has been the imperative to defend the right to speak on topical issues of the day from the perspective of Islamic modernism, the Islamic legitimacy of which has often been contested. The discursive strategies of emphasizing the inadequacy of traditional categories of Islamic thought and urging new ways of rethinking Islam in the modern world have yet to dislodge deeply engrained patterns of traditional Islamic thought that are sometimes the explicit issues in contention or often serving as the subtext within the debates. An alternative strategy of recovering and proclaiming selected elements within Islamic classics has so far marshaled strong arguments that demonstrate Qur'anic bases for an Islamic theology of liberation, Islamic roots of liberalism, democracy, social pluralism, peace-building, human rights, as well as Islamic warrants for gender equality.

Discursive strategies of excavating Islamic classics for warrants to support liberal positions within the contemporary Muslim debates deserve further development: it should be expanded and fortified with equally Islamically authentic rebuttals against the potentially violent responses with death fatwas and takfir [excommunication]. This is the focus of my project, and my presentation will explore the challenges and opportunities of using this strategy in the Nigerian context of contemporary application of Islamic law.

Expanding the vocabulary of Islamic liberalism

Gender issues in application of Islamic law in Nigeria